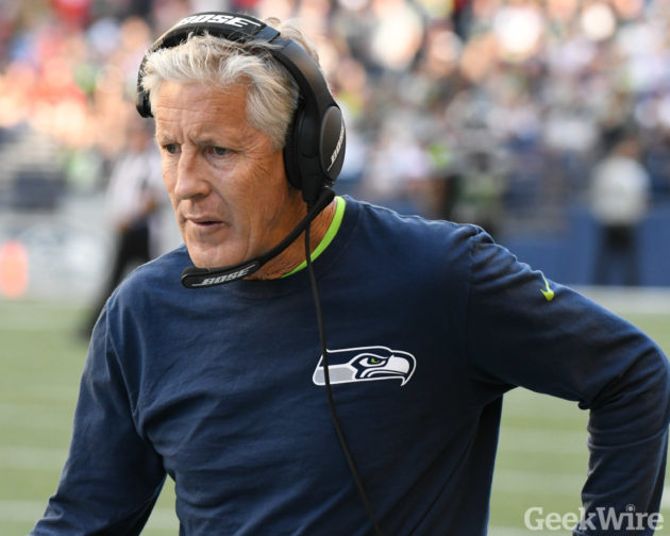 Finally, an answer to what Seattle Seahawks head coach Pete Carroll maybe should have done with the football at the goal line in Super Bowl XLIX: he should have scootered into the end zone himself.

In a new post on LinkedIn — which he just joined — Carroll shared a video in which he is shown racing around the hallways of a Microsoft office on scooters against the tech giant’s U.S. President Kate Johnson.

Johnson got the best of Carroll in the close race, in which someone in the video said, “always let the boss win.”

The NFL coach, who also calls himself a culture creator, competitor, optimist, leader, teacher and learner in his LinkedIn profile, was at Microsoft as part of a partnership between the company and Compete to Create, an educational platform created by Carroll and Dr. Michael Gervais “designed to transform individuals and organizations.”

Microsoft CEO Satya Nadella is listed under the Character section in which he and Carroll “teach the importance of becoming more aware of your character strengths and how to use them optimally day-to-day.” Microsoft CFO Amy Hood joins Gervais in the Calm section to “discuss the value of training calm. They introduce the concept of ‘FOPO’ and how fear can block your progress.”

Carroll just joined LinkedIn a few weeks ago, and said in a video introduction then that he was “looking forward to sharing stuff that we do in football and see how it relates to the corporate world.” The coach said he is still learning and growing himself.

« Previous China’s Vivo is eyeing smartphone users in Africa and the Middle East
Next » Downticket merges with Politiscope to let voters follow candidates, donate to campaigns in one app